St Laurence is named after Saint Laurence, who was horribly put to death in the 3rd century – you can read about him in the school foyer. The old Saxon Church in the town is dedicated to him. But actually our school history is more complicated… a clue is in our logo. It was decided that the symbol of St Laurence couldn’t be used as a school logo because it was an instrument of torture, used to kill the saint. Instead, our logo has two fish swimming. That logo was chosen in 1980 when St Laurence School was established as two schools merged.  The fish is a gudgeon, an important symbol in Bradford on Avon – look out for the model gudgeon on the town bridge on the roof of the old Lock Up. The two schools that joined together to form St Laurence were: Fitzmaurice Grammar School and Trinity Secondary Modern School.

We still have some teachers who taught in one or other of those original schools. Those two schools are the explanation of our dual foundation.

Fitzmaurice Grammar School developed from what was called the County Day School, which opened in 1897, and took its name from Lord Fitzmaurice, who was a member of Parliament and Chairman of Wiltshire County Council in the late 1800s and early 1900s. He set up the Lord Fitzmaurice Educational Trust to continue his support of education in Bradford on Avon. The Fitzmaurice Educational Trust is, today, one of the two parts of our school foundation. Some of our school governors are members of the Trust and the Trust makes generous donations each year to support opportunities for students at St Laurence School. Having the active and strong support of the Fitzmaurice Trust is one of the key ways that we, as a school, are firmly rooted in the Bradford on Avon community.

Trinity School opened in 1836, in Church Street, near Holy Trinity Church. In 1896, about the time Fitzmaurice school started, Trinity School moved to bigger buildings up the hill in Newtown. Back then it was a school for boys only, which seems incredibly unfair to half the population! It didn’t become a mixed school until 1928. In 1962 Trinity School moved to Ashley Road, the site of our school today. Today St Laurence continues to be a Church of England school, linked to the Salisbury Diocesan Board of Education and the Rector of Holy Trinity is one of our two Diocese Governors.

Since its opening in 1980 St Laurence has grown in size and reputation, with a mixture of older and very modern buildings, including the splendid Moulton building for Mathematics, opened in 2013 by Shaun Moulton, nephew of Sir Alex Moulton of Moulton Bicycles fame. St Laurence was a Performing Arts Specialist School for many years until a change in government policy led to the ceasing of the specialism programme. Nevertheless, our Performing Arts heritage is a strong and vibrant feature of the school, with superb performances every year in Dance, Music and Drama. Our partnership with our neighbour on site, the famous Wiltshire Music Centre, enables us to enjoy access to superb facilities and provides exciting and unique opportunities for our students.

Did you know that we have a Roman villa under our playing field? The outline of the villa can be seen during hot, dry weather when parch marks appear in the grass. These parch marks have been recorded by English Heritage using aerial photography.

Subsequent excavations by University of Bristol have resulted in the discovery of a superb mosaic (see photo) in the main villa building dating to AD360. Part of this had been overlain by a circular structure at a later date which may be an early Christian baptistery, predating the Saxon church in the centre of Bradford on Avon.

Geophysical survey showed the Roman villa had at least fifteen rooms and further wings extending under the modern housing estate. In addition to the main building, the geophysics revealed a second building of identical size and plan 30m away. The other building appears to be an agricultural/industrial building, complete with hypocaust (underfloor heating), which may have been used to produce smoke for curing food.

In 2003, St Laurence School and University of Bristol carried out a survey of the gardens close to School. Finds bags were distributed to 500 households and residents were asked to collect any finds they made whilst gardening. The finds included Roman coins, pottery and Roman roof tile. We proved that the buildings surrounding the villa reached as far as Winsley Road.

It is not possible to see any remains of the villa as it is buried beneath our playing field on private land. However, some finds are on display in Bradford on Avon Museum: 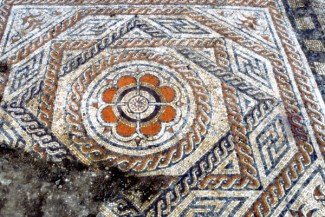 About Us
Head’s Welcome Christian Vision and Values School’s Heritage School Context Information Academy Trust School Governors SLSA Parents’ Association School Council What Others Say About Us Alumni
Manage Cookie Consent
To provide the best experiences, we use technologies like cookies to store and/or access device information. Consenting to these technologies will allow us to process data such as browsing behavior or unique IDs on this site.
Manage options Manage services Manage vendors Read more about these purposes
View preferences
{title} {title} {title}